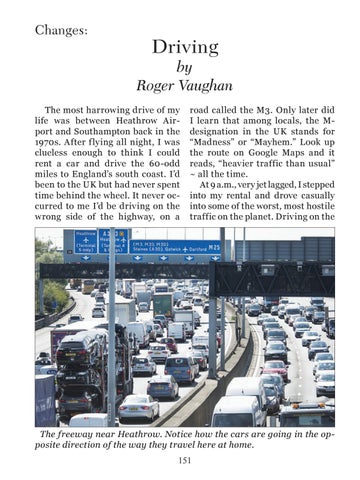 by Roger Vaughan The most harrowing drive of my life was between Heathrow Airport and Southampton back in the 1970s. After f lying all night, I was clueless enough to think I could rent a car and drive the 60-odd miles to England’s south coast. I’d been to the UK but had never spent time behind the wheel. It never occurred to me I’d be driving on the wrong side of the highway, on a

road called the M3. Only later did I learn that among locals, the Mdesignation in the UK stands for “Madness” or “Mayhem.” Look up the route on Google Maps and it reads, “heavier traffic than usual” ~ all the time. At 9 a.m., very jet lagged, I stepped into my rental and drove casually into some of the worst, most hostile traffic on the planet. Driving on the

The freeway near Heathrow. Notice how the cars are going in the opposite direction of the way they travel here at home. 151