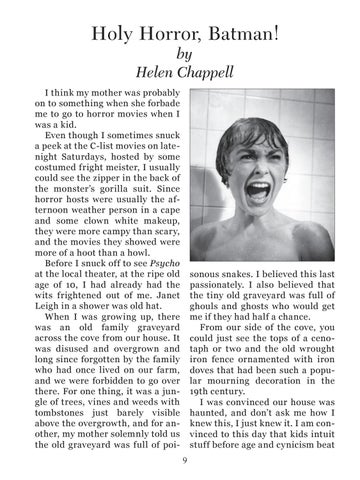 I think my mother was probably on to something when she forbade me to go to horror movies when I was a kid. Even though I sometimes snuck a peek at the C-list movies on latenight Saturdays, hosted by some costumed fright meister, I usually could see the zipper in the back of the monsterâ&#x20AC;&#x2122;s gorilla suit. Since horror hosts were usually the afternoon weather person in a cape and some clown white makeup, they were more campy than scary, and the movies they showed were more of a hoot than a howl. Before I snuck off to see Psycho at the local theater, at the ripe old age of 10, I had already had the wits frightened out of me. Janet Leigh in a shower was old hat. When I was growing up, there was an old family graveyard across the cove from our house. It was disused and overgrown and long since forgotten by the family who had once lived on our farm, and we were forbidden to go over there. For one thing, it was a jungle of trees, vines and weeds with tombstones just barely visible above the overgrowth, and for another, my mother solemnly told us the old graveyard was full of poi-

sonous snakes. I believed this last passionately. I also believed that the tiny old graveyard was full of ghouls and ghosts who would get me if they had half a chance. From our side of the cove, you could just see the tops of a cenotaph or two and the old wrought iron fence ornamented with iron doves that had been such a popular mourning decoration in the 19th century. I was convinced our house was haunted, and donâ&#x20AC;&#x2122;t ask me how I knew this, I just knew it. I am convinced to this day that kids intuit stuff before age and cynicism beat 9