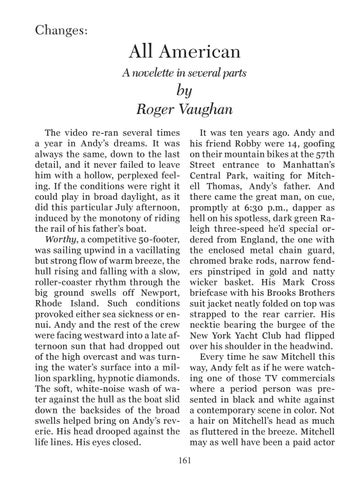 All American A novelette in several parts

by Roger Vaughan The video re-ran several times a year in Andy’s dreams. It was always the same, down to the last detail, and it never failed to leave him with a hollow, perplexed feeling. If the conditions were right it could play in broad daylight, as it did this particular July afternoon, induced by the monotony of riding the rail of his father’s boat. Worthy, a competitive 50-footer, was sailing upwind in a vacillating but strong f low of warm breeze, the hull rising and falling with a slow, roller-coaster rhythm through the big ground swells off Newport, Rhode Island. Such conditions provoked either sea sickness or ennui. Andy and the rest of the crew were facing westward into a late afternoon sun that had dropped out of the high overcast and was turning the water’s surface into a million sparkling, hypnotic diamonds. The soft, white-noise wash of water against the hull as the boat slid down the backsides of the broad swells helped bring on Andy’s reverie. His head drooped against the life lines. His eyes closed.

It was ten years ago. Andy and his friend Robby were 14, goofing on their mountain bikes at the 57th Street entrance to Manhattan’s Central Park, waiting for Mitchell Thomas, Andy’s father. And there came the great man, on cue, promptly at 6:30 p.m., dapper as hell on his spotless, dark green Raleigh three-speed he’d special ordered from England, the one with the enclosed metal chain guard, chromed brake rods, narrow fenders pinstriped in gold and natty wicker basket. His Mark Cross briefcase with his Brooks Brothers suit jacket neatly folded on top was strapped to the rear carrier. His necktie bearing the burgee of the New York Yacht Club had f lipped over his shoulder in the headwind. Every time he saw Mitchell this way, Andy felt as if he were watching one of those TV commercials where a period person was presented in black and white against a contemporary scene in color. Not a hair on Mitchell’s head as much as f luttered in the breeze. Mitchell may as well have been a paid actor