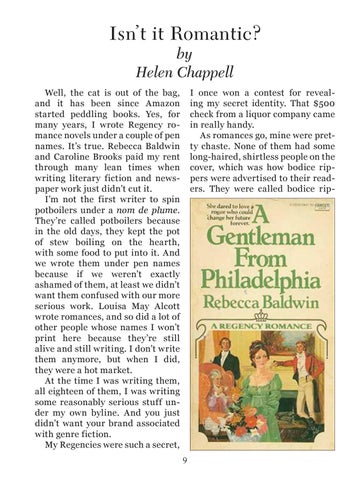 Isn’t it Romantic? by Helen Chappell

Well, the cat is out of the bag, and it has been since Amazon started peddling books. Yes, for many years, I wrote Regency romance novels under a couple of pen names. It’s true. Rebecca Baldwin and Caroline Brooks paid my rent through many lean times when writing literary fiction and newspaper work just didn’t cut it. I’m not the first writer to spin potboilers under a nom de plume. They’re called potboilers because in the old days, they kept the pot of stew boiling on the hearth, with some food to put into it. And we wrote them under pen names because if we weren’t exactly ashamed of them, at least we didn’t want them confused with our more serious work. Louisa May Alcott wrote romances, and so did a lot of other people whose names I won’t print here because they’re still alive and still writing. I don’t write them anymore, but when I did, they were a hot market. At the time I was writing them, all eighteen of them, I was writing some reasonably serious stuff under my own byline. And you just didn’t want your brand associated with genre fiction. My Regencies were such a secret,

I once won a contest for revealing my secret identity. That $500 check from a liquor company came in really handy. As romances go, mine were pretty chaste. None of them had some long-haired, shirtless people on the cover, which was how bodice rippers were advertised to their readers. They were called bodice rip-