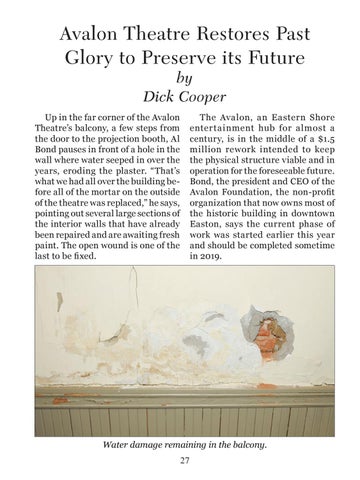 Up in the far corner of the Avalon Theatre’s balcony, a few steps from the door to the projection booth, Al Bond pauses in front of a hole in the wall where water seeped in over the years, eroding the plaster. “That’s what we had all over the building before all of the mortar on the outside of the theatre was replaced,” he says, pointing out several large sections of the interior walls that have already been repaired and are awaiting fresh paint. The open wound is one of the last to be fixed.

The Avalon, an Eastern Shore enter tainment hub for almost a century, is in the middle of a $1.5 million rework intended to keep the physical structure viable and in operation for the foreseeable future. Bond, the president and CEO of the Avalon Foundation, the non-profit organization that now owns most of the historic building in downtown Easton, says the current phase of work was started earlier this year and should be completed sometime in 2019.

Water damage remaining in the balcony. 27