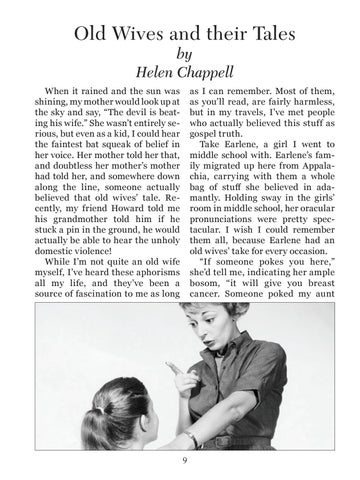 Old Wives and their Tales by Helen Chappell

as I can remember. Most of them, as you’ll read, are fairly harmless, but in my travels, I’ve met people who actually believed this stuff as gospel truth. Take Earlene, a girl I went to middle school with. Earlene’s family migrated up here from Appalachia, carrying with them a whole bag of stuff she believed in adamantly. Holding sway in the girls’ room in middle school, her oracular pronunciations were pretty spectacular. I wish I could remember them all, because Earlene had an old wives’ take for every occasion. “If someone pokes you here,” she’d tell me, indicating her ample bosom, “it will give you breast cancer. Someone poked my aunt

When it rained and the sun was shining, my mother would look up at the sky and say, “The devil is beating his wife.” She wasn’t entirely serious, but even as a kid, I could hear the faintest bat squeak of belief in her voice. Her mother told her that, and doubtless her mother’s mother had told her, and somewhere down along the line, someone actually believed that old wives’ tale. Recently, my friend Howard told me his grandmother told him if he stuck a pin in the ground, he would actually be able to hear the unholy domestic violence! While I’m not quite an old wife myself, I’ve heard these aphorisms all my life, and they’ve been a source of fascination to me as long