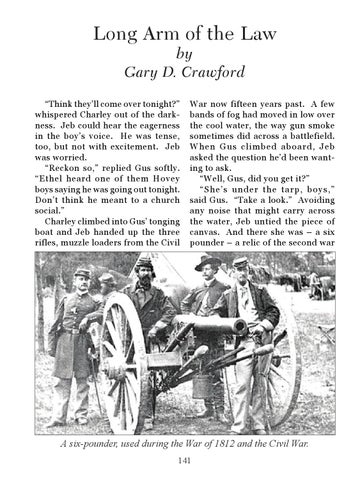 Long Arm of the Law by Gary D. Crawford

“Think they’ll come over tonight?” whispered Charley out of the darkness. Jeb could hear the eagerness in the boy’s voice. He was tense, too, but not with excitement. Jeb was worried. “Reckon so,” replied Gus softly. “Ethel heard one of them Hovey boys saying he was going out tonight. Don’t think he meant to a church social.” Charley climbed into Gus’ tonging boat and Jeb handed up the three rifles, muzzle loaders from the Civil

War now fifteen years past. A few bands of fog had moved in low over the cool water, the way gun smoke sometimes did across a battlefield. When Gus climbed aboard, Jeb asked the question he’d been wanting to ask. “Well, Gus, did you get it?” “She’s under the tarp, boys,” said Gus. “Take a look.” Avoiding any noise that might carry across the water, Jeb untied the piece of canvas. And there she was – a six pounder – a relic of the second war