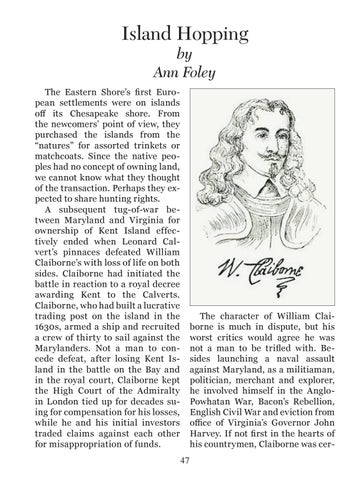 The Eastern Shore’s first European settlements were on islands off its Chesapeake shore. From the newcomers’ point of view, they purchased the islands from the “natures” for assorted trinkets or matchcoats. Since the native peoples had no concept of owning land, we cannot know what they thought of the transaction. Perhaps they expected to share hunting rights. A subsequent tug-of-war between Maryland and Virginia for ownership of Kent Island effectively ended when Leonard Calvert’s pinnaces defeated William Claiborne’s with loss of life on both sides. Claiborne had initiated the battle in reaction to a royal decree awarding Kent to the Calverts. Claiborne, who had built a lucrative trading post on the island in the 1630s, armed a ship and recruited a crew of thirty to sail against the Marylanders. Not a man to concede defeat, after losing Kent Island in the battle on the Bay and in the royal court, Claiborne kept the High Court of the Admiralty in London tied up for decades suing for compensation for his losses, while he and his initial investors traded claims against each other for misappropriation of funds.

The character of William Claiborne is much in dispute, but his worst critics would agree he was not a man to be trifled with. Besides launching a naval assault against Maryland, as a militiaman, politician, merchant and explorer, he involved himself in the AngloPowhatan War, Bacon’s Rebellion, English Civil War and eviction from office of Virginia’s Governor John Harvey. If not first in the hearts of his countrymen, Claiborne was cer47