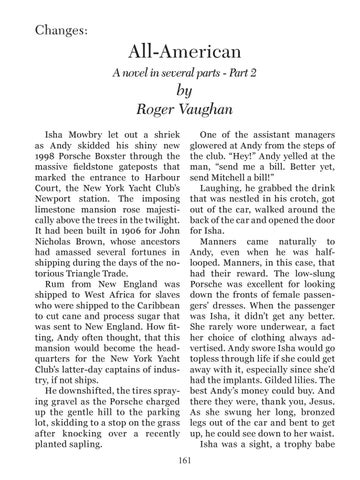 by Roger Vaughan Isha Mowbry let out a shriek as Andy skidded his shiny new 1998 Porsche Boxster through the massive fieldstone gateposts that marked the entrance to Harbour Court, the New York Yacht Club’s Newport station. The imposing limestone mansion rose majestically above the trees in the twilight. It had been built in 1906 for John Nicholas Brown, whose ancestors had amassed several fortunes in shipping during the days of the notorious Triangle Trade. Rum from New England was shipped to West Africa for slaves who were shipped to the Caribbean to cut cane and process sugar that was sent to New England. How fitting, Andy often thought, that this mansion would become the headquarters for the New York Yacht Club’s latter-day captains of industry, if not ships. He downshifted, the tires spraying gravel as the Porsche charged up the gentle hill to the parking lot, skidding to a stop on the grass after knocking over a recently planted sapling.

One of the assistant managers glowered at Andy from the steps of the club. “Hey!” Andy yelled at the man, “send me a bill. Better yet, send Mitchell a bill!” Laughing, he grabbed the drink that was nestled in his crotch, got out of the car, walked around the back of the car and opened the door for Isha. Manners came naturally to Andy, even when he was halflooped. Manners, in this case, that had their reward. The low-slung Porsche was excellent for looking down the fronts of female passengers’ dresses. When the passenger was Isha, it didn’t get any better. She rarely wore underwear, a fact her choice of clothing always advertised. Andy swore Isha would go topless through life if she could get away with it, especially since she’d had the implants. Gilded lilies. The best Andy’s money could buy. And there they were, thank you, Jesus. As she swung her long, bronzed legs out of the car and bent to get up, he could see down to her waist. Isha was a sight, a trophy babe