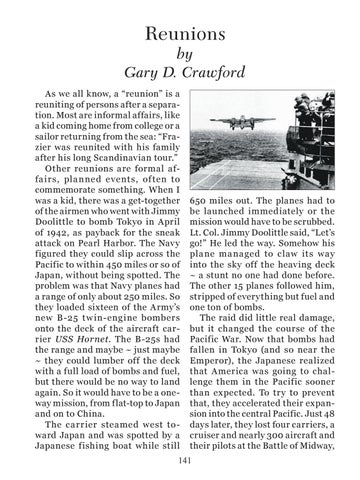 by Gary D. Crawford As we all know, a “reunion” is a reuniting of persons after a separation. Most are informal affairs, like a kid coming home from college or a sailor returning from the sea: “Frazier was reunited with his family after his long Scandinavian tour.” Other reunions are formal affa i r s, pla n ne d e vent s, of ten to commemorate something. When I was a kid, there was a get-together of the airmen who went with Jimmy Doolittle to bomb Tokyo in April of 1942, as payback for the sneak attack on Pearl Harbor. The Navy figured they could slip across the Pacific to within 450 miles or so of Japan, without being spotted. The problem was that Navy planes had a range of only about 250 miles. So they loaded sixteen of the Army’s new B-25 t w in-engine bombers onto the deck of the aircraft carrier USS Hornet. The B-25s had the range and maybe ~ just maybe ~ they could lumber off the deck with a full load of bombs and fuel, but there would be no way to land again. So it would have to be a oneway mission, from f lat-top to Japan and on to China. The carr ier steamed west to ward Japan and was spotted by a Japanese fishing boat while still

650 miles out. The planes had to be launched immediately or the mission would have to be scrubbed. Lt. Col. Jimmy Doolittle said, “Let’s go!” He led the way. Somehow his pla ne ma naged to claw it s way into the sky off the heaving deck ~ a stunt no one had done before. The other 15 planes followed him, stripped of everything but fuel and one ton of bombs. The raid did little real damage, but it changed the course of the Pacific War. Now that bombs had fallen in Tokyo (and so near the Emperor), the Japanese realized that America was going to challenge them in the Pacific sooner than expected. To try to prevent that, they accelerated their expansion into the central Pacific. Just 48 days later, they lost four carriers, a cruiser and nearly 300 aircraft and their pilots at the Battle of Midway,