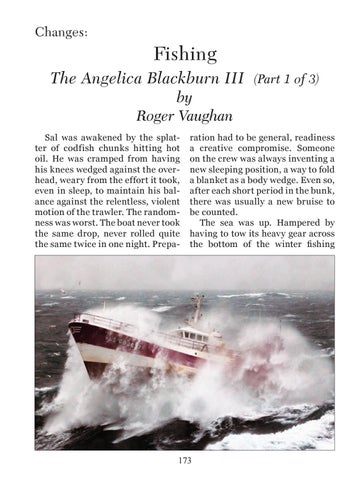 Sal was awakened by the splatter of codfish chunks hitting hot oil. He was cramped from having his knees wedged against the overhead, weary from the effort it took, even in sleep, to maintain his balance against the relentless, violent motion of the trawler. The randomness was worst. The boat never took the same drop, never rolled quite the same twice in one night. Prepa-

ration had to be general, readiness a creative compromise. Someone on the crew was always inventing a new sleeping position, a way to fold a blanket as a body wedge. Even so, after each short period in the bunk, there was usually a new bruise to be counted. The sea was up. Hampered by having to tow its heavy gear across the bottom of the winter fishing