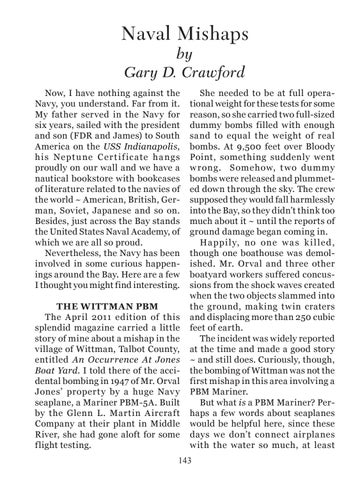 Now, I have nothing against the Navy, you understand. Far from it. My father served in the Navy for six years, sailed with the president and son (FDR and James) to South America on the USS Indianapolis, h i s Nept u ne C er t i f ic ate h a ng s proudly on our wall and we have a nautical bookstore with bookcases of literature related to the navies of the world ~ American, British, German, Soviet, Japanese and so on. Besides, just across the Bay stands the United States Naval Academy, of which we are all so proud. Nevertheless, the Navy has been involved in some curious happenings around the Bay. Here are a few I thought you might find interesting. THE WITTMAN PBM The April 2011 edition of this splendid magazine carried a little story of mine about a mishap in the village of Wittman, Talbot County, entitled An Occurrence At Jones Boat Yard. I told there of the accidental bombing in 1947 of Mr. Orval Jones’ proper t y by a huge Nav y seaplane, a Mariner PBM-5A. Built by the Glenn L. Martin Aircraft Company at their plant in Middle River, she had gone aloft for some f light testing.

She needed to be at full operational weight for these tests for some reason, so she carried two full-sized dummy bombs filled with enough sand to equal the weight of real bombs. At 9,500 feet over Bloody Point, something suddenly went w rong. S omehow, t wo du m my bombs were released and plummeted down through the sky. The crew supposed they would fall harmlessly into the Bay, so they didn’t think too much about it ~ until the reports of ground damage began coming in. H appi l y, no one w a s k i l le d , though one boathouse was demolished. Mr. Orval and three other boatyard workers suffered concussions from the shock waves created when the two objects slammed into the ground, making twin craters and displacing more than 250 cubic feet of earth. The incident was widely reported at the time and made a good story ~ and still does. Curiously, though, the bombing of Wittman was not the first mishap in this area involving a PBM Mariner. But what is a PBM Mariner? Perhaps a few words about seaplanes would be helpful here, since these days we don’t connect airplanes with the water so much, at least