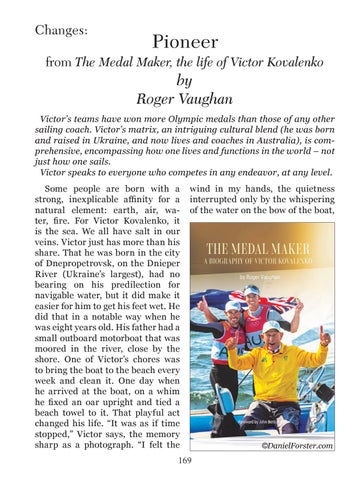 from The Medal Maker, the life of Victor Kovalenko

by Roger Vaughan Victor’s teams have won more Olympic medals than those of any other sailing coach. Victor’s matrix, an intriguing cultural blend (he was born and raised in Ukraine, and now lives and coaches in Australia), is comprehensive, encompassing how one lives and functions in the world – not just how one sails. Victor speaks to everyone who competes in any endeavor, at any level. Some people are born with a strong, inexplicable affinity for a natural element: earth, air, water, fire. For Victor Kovalenko, it is the sea. We all have salt in our veins. Victor just has more than his share. That he was born in the city of Dnepropetrovsk, on the Dnieper River (Ukraine’s largest), had no bearing on his predilection for navigable water, but it did make it easier for him to get his feet wet. He did that in a notable way when he was eight years old. His father had a small outboard motorboat that was moored in the river, close by the shore. One of Victor’s chores was to bring the boat to the beach every week and clean it. One day when he arrived at the boat, on a whim he fixed an oar upright and tied a beach towel to it. That playful act changed his life. “It was as if time stopped,” Victor says, the memory sharp as a photograph. “I felt the

wind in my hands, the quietness interrupted only by the whispering of the water on the bow of the boat,