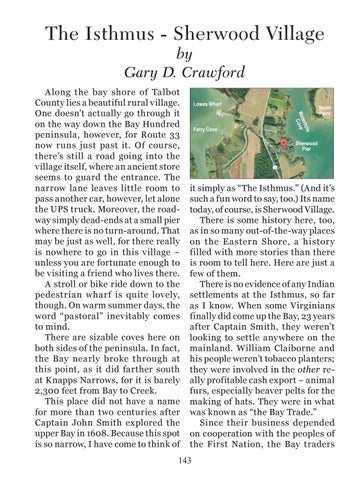 A long the bay shore of Talbot County lies a beautiful rural village. One doesn’t actually go through it on the way down the Bay Hundred peninsula, however, for Route 33 now runs just past it. Of course, there’s still a road going into the village itself, where an ancient store seems to guard the entrance. The narrow lane leaves little room to pass another car, however, let alone the UPS truck. Moreover, the roadway simply dead-ends at a small pier where there is no turn-around. That may be just as well, for there really is nowhere to go in this village ~ unless you are fortunate enough to be visiting a friend who lives there. A stroll or bike ride down to the pedestrian wharf is quite lovely, though. On warm summer days, the word “pastoral” inevitably comes to mind. There are sizable coves here on both sides of the peninsula. In fact, the Bay nearly broke through at this point, as it did farther south at Knapps Narrows, for it is barely 2,300 feet from Bay to Creek. This place did not have a name for more than two centuries after Captain John Smith explored the upper Bay in 1608. Because this spot is so narrow, I have come to think of

it simply as “The Isthmus.” (And it’s such a fun word to say, too.) Its name today, of course, is Sherwood Village. There is some history here, too, as in so many out-of-the-way places on the Eastern Shore, a histor y filled with more stories than there is room to tell here. Here are just a few of them. There is no evidence of any Indian settlements at the Isthmus, so far as I know. When some Virginians finally did come up the Bay, 23 years after Captain Smith, they weren’t looking to settle anywhere on the mainland. William Claiborne and his people weren’t tobacco planters; they were involved in the other really profitable cash export ~ animal furs, especially beaver pelts for the making of hats. They were in what was known as “the Bay Trade.” Since their business depended on cooperation with the peoples of the First Nation, the Bay traders