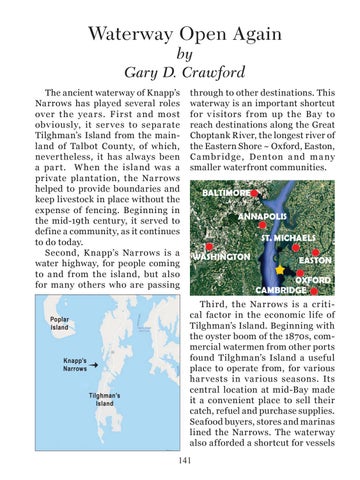 The ancient waterway of Knapp’s Narrows has played several roles over t he ye a r s. F i r st a nd most obv iously, it ser ves to separate Tilghman’s Island from the mainland of Talbot County, of which, nevertheless, it has always been a par t. When the island was a private plantation, the Narrows helped to provide boundaries and keep livestock in place without the expense of fencing. Beginning in the mid-19th century, it served to define a community, as it continues to do today. Second, K napp’s Narrows is a water highway, for people coming to and from the island, but also for many others who are passing

through to other destinations. This waterway is an important shortcut for v isitors f rom up t he Bay to reach destinations along the Great Choptank River, the longest river of the Eastern Shore ~ Oxford, Easton, C a mbr id ge , D e nton a nd m a ny smaller waterfront communities. BALTIMORE ANNAPOLIS ST. MICHAELS WASHINGTON

Third, the Narrows is a critical factor in the economic life of Tilghman’s Island. Beginning with the oyster boom of the 1870s, commercial watermen from other ports found Tilghman’s Island a useful place to operate from, for various har vests in various seasons. Its central location at mid-Bay made it a convenient place to sell their catch, refuel and purchase supplies. Seafood buyers, stores and marinas lined the Narrows. The waterway also afforded a shortcut for vessels 141