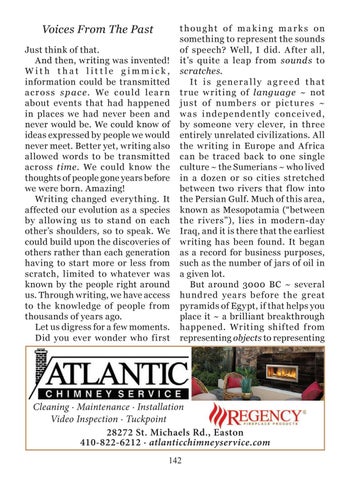 Voices From The Past Just think of that. And then, writing was invented! With that little gimmick, information could be transmitted a c r o s s s p a c e. We c o u l d l e a r n about events that had happened in places we had never been and never would be. We could know of ideas expressed by people we would never meet. Better yet, writing also allowed words to be transmitted across time. We could know the thoughts of people gone years before we were born. Amazing! Writing changed everything. It affected our evolution as a species by allowing us to stand on each other’s shoulders, so to speak. We could build upon the discoveries of others rather than each generation having to start more or less from scratch, limited to whatever was known by the people right around us. Through writing, we have access to the knowledge of people from thousands of years ago. Let us digress for a few moments. Did you ever wonder who first

t hought of ma k ing mark s on something to represent the sounds of speech? Well, I did. After all, it’s quite a leap from sounds to scratches. It i s gener a l ly ag re e d t hat tr ue w r it ing of language ~ not ju s t of nu mb er s or pic t u r e s ~ w a s i nde p e nde nt l y c onc e i ve d , by someone very clever, in three entirely unrelated civilizations. All the writing in Europe and Africa can be traced back to one single culture ~ the Sumerians ~ who lived in a dozen or so cities stretched between two rivers that f low into the Persian Gulf. Much of this area, known as Mesopotamia (“between the rivers”), lies in modern-day Iraq, and it is there that the earliest writing has been found. It began as a record for business purposes, such as the number of jars of oil in a given lot. But around 3000 BC ~ several hundred years before t he great pyramids of Egypt, if that helps you place it ~ a brilliant breakthrough happened. Writing shif ted from representing objects to representing