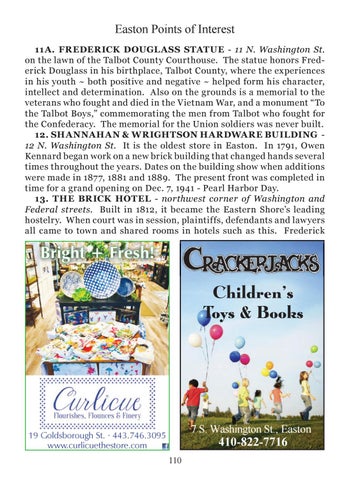 Easton Points of Interest 11A. FREDERICK DOUGLASS STATUE - 11 N. Washington St. on the lawn of the Talbot County Courthouse. The statue honors Frederick Douglass in his birthplace, Talbot County, where the experiences in his youth ~ both positive and negative ~ helped form his character, intellect and determination. Also on the grounds is a memorial to the veterans who fought and died in the Vietnam War, and a monument “To the Talbot Boys,” commemorating the men from Talbot who fought for the Confederacy. The memorial for the Union soldiers was never built. 12. SHANNAHAN & WRIGHTSON HARDWARE BUILDING 12 N. Washington St. It is the oldest store in Easton. In 1791, Owen Kennard began work on a new brick building that changed hands several times throughout the years. Dates on the building show when additions were made in 1877, 1881 and 1889. The present front was completed in time for a grand opening on Dec. 7, 1941 - Pearl Harbor Day. 13. THE BRICK HOTEL - northwest corner of Washington and Federal streets. Built in 1812, it became the Eastern Shore’s leading hostelry. When court was in session, plaintiffs, defendants and lawyers all came to town and shared rooms in hotels such as this. Frederick