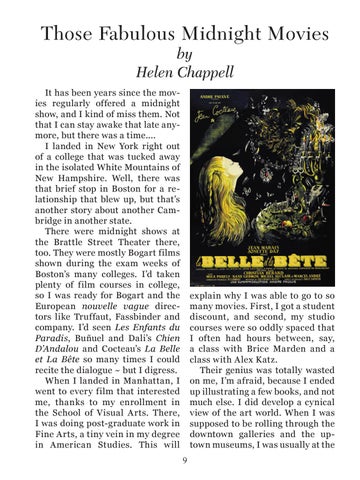 It has been years since the movies regularly offered a midnight show, and I kind of miss them. Not that I can stay awake that late anymore, but there was a time.... I landed in New York right out of a college that was tucked away in the isolated White Mountains of New Hampshire. Well, there was that brief stop in Boston for a relationship that blew up, but that’s another story about another Cambridge in another state. There were midnight shows at the Brattle Street Theater there, too. They were mostly Bogart films shown during the exam weeks of Boston’s many colleges. I’d taken plenty of film courses in college, so I was ready for Bogart and the European nouvelle vague directors like Truffaut, Fassbinder and company. I’d seen Les Enfants du Paradis, Buñuel and Dali’s Chien D’Andalou and Cocteau’s La Belle et La Bête so many times I could recite the dialogue ~ but I digress. When I landed in Manhattan, I went to every film that interested me, thanks to my enrollment in the School of Visual Arts. There, I was doing post-graduate work in Fine Arts, a tiny vein in my degree in American Studies. This will

explain why I was able to go to so many movies. First, I got a student discount, and second, my studio courses were so oddly spaced that I often had hours between, say, a class with Brice Marden and a class with Alex Katz. Their genius was totally wasted on me, I’m afraid, because I ended up illustrating a few books, and not much else. I did develop a cynical view of the art world. When I was supposed to be rolling through the downtown galleries and the uptown museums, I was usually at the 9