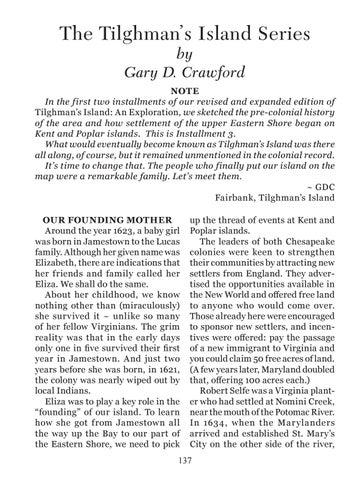 NOTE In the first two installments of our revised and expanded edition of Tilghman’s Island: An Exploration, we sketched the pre-colonial history of the area and how settlement of the upper Eastern Shore began on Kent and Poplar islands. This is Installment 3. What would eventually become known as Tilghman’s Island was there all along, of course, but it remained unmentioned in the colonial record. It’s time to change that. The people who finally put our island on the map were a remarkable family. Let’s meet them. ~ GDC Fairbank, Tilghman’s Island OUR FOUNDING MOTHER Around the year 1623, a baby girl was born in Jamestown to the Lucas family. Although her given name was Elizabeth, there are indications that her friends and family called her Eliza. We shall do the same. About her childhood, we know nothing other than (miraculously) she survived it ~ unlike so many of her fellow Virginians. The grim reality was that in the early days only one in five survived their first year in Jamestown. And just two years before she was born, in 1621, the colony was nearly wiped out by local Indians. Eliza was to play a key role in the “founding” of our island. To learn how she got from Jamestown all the way up the Bay to our part of the Eastern Shore, we need to pick

up the thread of events at Kent and Poplar islands. The leaders of both Chesapeake colonies were keen to strengthen their communities by attracting new settlers from England. They advertised the opportunities available in the New World and offered free land to anyone who would come over. Those already here were encouraged to sponsor new settlers, and incentives were offered: pay the passage of a new immigrant to Virginia and you could claim 50 free acres of land. (A few years later, Maryland doubled that, offering 100 acres each.) Robert Selfe was a Virginia planter who had settled at Nomini Creek, near the mouth of the Potomac River. In 1634, when the Mar ylanders arrived and established St. Mary’s City on the other side of the river,