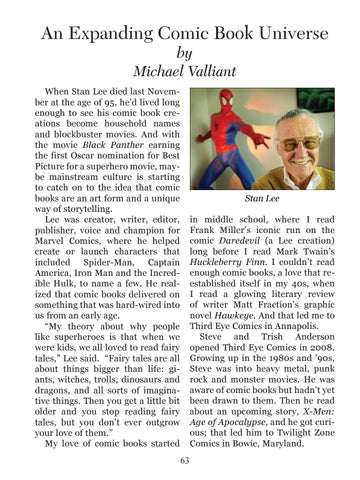 When Stan Lee died last November at the age of 95, he’d lived long enough to see his comic book creations become household names and blockbuster movies. And with the movie Black Panther earning the first Oscar nomination for Best Picture for a superhero movie, maybe mainstream culture is starting to catch on to the idea that comic books are an art form and a unique way of storytelling. Lee was creator, writer, editor, publisher, voice and champion for Marvel Comics, where he helped create or launch characters that included Spider-Man, Captain America, Iron Man and the Incredible Hulk, to name a few. He realized that comic books delivered on something that was hard-wired into us from an early age. “My theory about why people like superheroes is that when we were kids, we all loved to read fairy tales,” Lee said. “Fairy tales are all about things bigger than life: giants, witches, trolls, dinosaurs and dragons, and all sorts of imaginative things. Then you get a little bit older and you stop reading fairy tales, but you don’t ever outgrow your love of them.” My love of comic books started

Stan Lee in middle school, where I read Frank Miller’s iconic run on the comic Daredevil (a Lee creation) long before I read Mark Twain’s Huckleberry Finn. I couldn’t read enough comic books, a love that reestablished itself in my 40s, when I read a glowing literary review of writer Matt Fraction’s graphic novel Hawkeye. And that led me to Third Eye Comics in Annapolis. Steve and Trish Anderson opened Third Eye Comics in 2008. Growing up in the 1980s and ’90s, Steve was into heavy metal, punk rock and monster movies. He was aware of comic books but hadn’t yet been drawn to them. Then he read about an upcoming story, X-Men: Age of Apocalypse, and he got curious; that led him to Twilight Zone Comics in Bowie, Maryland. 63