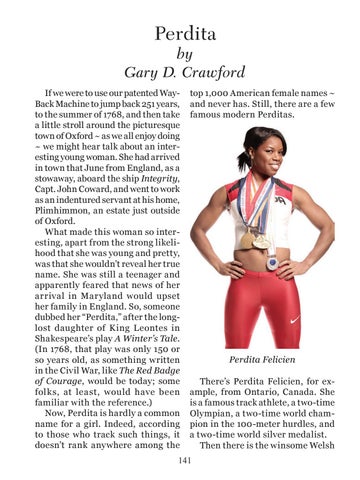 by Gary D. Crawford If we were to use our patented WayBack Machine to jump back 251 years, to the summer of 1768, and then take a little stroll around the picturesque town of Oxford ~ as we all enjoy doing ~ we might hear talk about an interesting young woman. She had arrived in town that June from England, as a stowaway, aboard the ship Integrity, Capt. John Coward, and went to work as an indentured servant at his home, Plimhimmon, an estate just outside of Oxford. What made this woman so interesting, apart from the strong likelihood that she was young and pretty, was that she wouldn’t reveal her true name. She was still a teenager and apparently feared that news of her arrival in Maryland would upset her family in England. So, someone dubbed her “Perdita,” after the longlost daughter of King Leontes in Shakespeare’s play A Winter’s Tale. (In 1768, that play was only 150 or so years old, as something written in the Civil War, like The Red Badge of Courage, would be today; some folks, at least, would have been familiar with the reference.) Now, Perdita is hardly a common name for a girl. Indeed, according to those who track such things, it doesn’t rank anywhere among the

top 1,000 American female names ~ and never has. Still, there are a few famous modern Perditas.