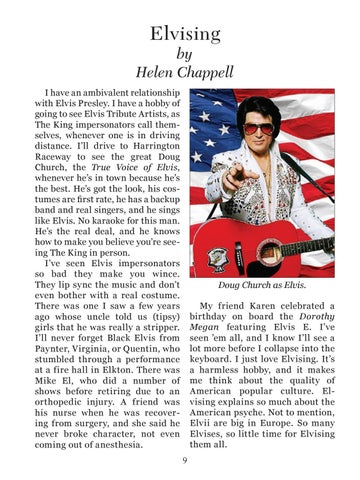 by Helen Chappell I have an ambivalent relationship with Elvis Presley. I have a hobby of going to see Elvis Tribute Artists, as The King impersonators call themselves, whenever one is in driving distance. I’ll drive to Harrington Raceway to see the great Doug Church, the True Voice of Elvis, whenever he’s in town because he’s the best. He’s got the look, his costumes are first rate, he has a backup band and real singers, and he sings like Elvis. No karaoke for this man. He’s the real deal, and he knows how to make you believe you’re seeing The King in person. I’ve seen Elvis impersonators so bad they make you wince. They lip sync the music and don’t even bother with a real costume. There was one I saw a few years ago whose uncle told us (tipsy) girls that he was really a stripper. I’ll never forget Black Elvis from Paynter, Virginia, or Quentin, who stumbled through a performance at a fire hall in Elkton. There was Mike El, who did a number of shows before retiring due to an orthopedic injury. A friend was his nurse when he was recovering from surgery, and she said he never broke character, not even coming out of anesthesia.

Doug Church as Elvis. My friend Karen celebrated a birthday on board the Dorothy Megan featuring Elvis E. I’ve seen ’em all, and I know I’ll see a lot more before I collapse into the keyboard. I just love Elvising. It’s a harmless hobby, and it makes me think about the quality of American popular culture. Elvising explains so much about the American psyche. Not to mention, Elvii are big in Europe. So many Elvises, so little time for Elvising them all. 9