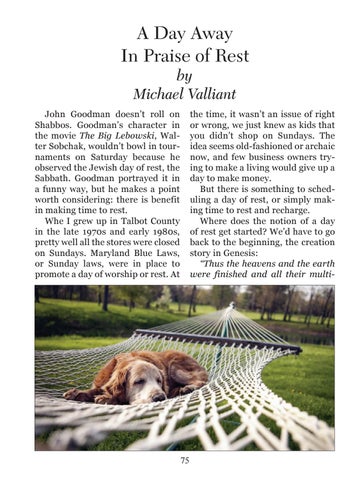 A Day Away In Praise of Rest by Michael Valliant

the time, it wasn’t an issue of right or wrong, we just knew as kids that you didn’t shop on Sundays. The idea seems old-fashioned or archaic now, and few business owners trying to make a living would give up a day to make money. But there is something to scheduling a day of rest, or simply making time to rest and recharge. Where does the notion of a day of rest get started? We’d have to go back to the beginning, the creation story in Genesis: “Thus the heavens and the earth were finished and all their multi-

John Goodman doesn’t roll on Shabbos. Goodman’s character in the movie The Big Lebowski, Walter Sobchak, wouldn’t bowl in tournaments on Saturday because he observed the Jewish day of rest, the Sabbath. Goodman portrayed it in a funny way, but he makes a point worth considering: there is benefit in making time to rest. Whe I grew up in Talbot County in the late 1970s and early 1980s, pretty well all the stores were closed on Sundays. Maryland Blue Laws, or Sunday laws, were in place to promote a day of worship or rest. At