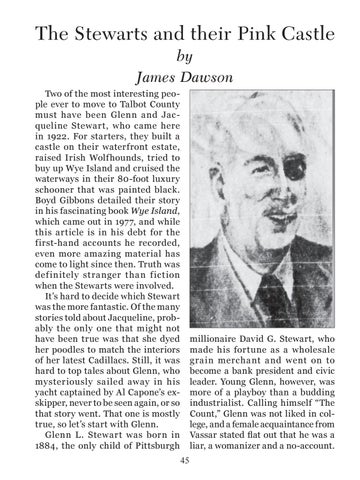 The Stewarts and their Pink Castle by James Dawson Two of the most interesting people ever to move to Talbot County must have been Glenn and Jacqueline Stewart, who came here in 1922. For starters, they built a castle on their waterfront estate, raised Irish Wolf hounds, tried to buy up Wye Island and cruised the waterways in their 80-foot luxury schooner that was painted black. Boyd Gibbons detailed their story in his fascinating book Wye Island, which came out in 1977, and while this article is in his debt for the first-hand accounts he recorded, even more amazing material has come to light since then. Truth was def initely stranger than f iction when the Stewarts were involved. It’s hard to decide which Stewart was the more fantastic. Of the many stories told about Jacqueline, probably the only one that might not have been true was that she dyed her poodles to match the interiors of her latest Cadillacs. Still, it was hard to top tales about Glenn, who mysteriously sailed away in his yacht captained by Al Capone’s exskipper, never to be seen again, or so that story went. That one is mostly true, so let’s start with Glenn. Glenn L. Stewart was born in 1884, the only child of Pittsburgh

millionaire David G. Stewart, who made his fortune as a wholesale grain merchant and went on to become a bank president and civic leader. Young Glenn, however, was more of a playboy than a budding industrialist. Calling himself “The Count,” Glenn was not liked in college, and a female acquaintance from Vassar stated flat out that he was a liar, a womanizer and a no-account. 45