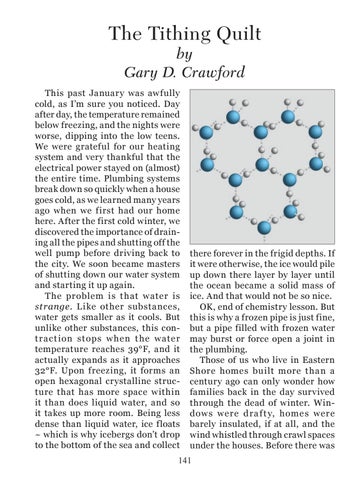 This past January was awfully cold, as I’m sure you noticed. Day after day, the temperature remained below freezing, and the nights were worse, dipping into the low teens. We were grateful for our heating system and very thankful that the electrical power stayed on (almost) the entire time. Plumbing systems break down so quickly when a house goes cold, as we learned many years ago when we first had our home here. After the first cold winter, we discovered the importance of draining all the pipes and shutting off the well pump before driving back to the city. We soon became masters of shutting down our water system and starting it up again. The problem is t hat water is st range. Like other substances, water gets smaller as it cools. But unlike other substances, this cont r ac t ion s top s w hen t he w ater temperature reaches 39°F, and it actually expands as it approaches 32°F. Upon freezing, it forms an open hexagonal crystalline structure that has more space within it than does liquid water, and so it takes up more room. Being less dense than liquid water, ice f loats ~ which is why icebergs don’t drop to the bottom of the sea and collect

there forever in the frigid depths. If it were otherwise, the ice would pile up down there layer by layer until the ocean became a solid mass of ice. And that would not be so nice. OK, end of chemistry lesson. But this is why a frozen pipe is just fine, but a pipe filled with frozen water may burst or force open a joint in the plumbing. Those of us who live in Eastern Shore homes built more t han a century ago can only wonder how families back in the day survived through the dead of winter. Window s were d r a f t y, home s were barely insulated, if at all, and the wind whistled through crawl spaces under the houses. Before there was