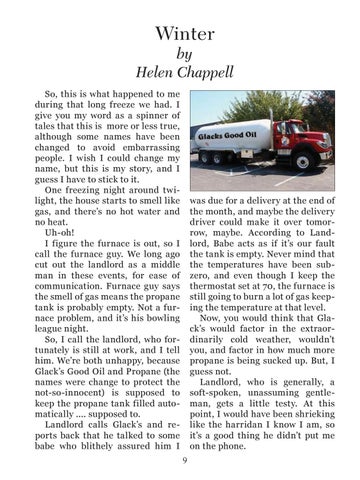 by Helen Chappell So, this is what happened to me during that long freeze we had. I give you my word as a spinner of tales that this is more or less true, although some names have been changed to avoid embarrassing people. I wish I could change my name, but this is my story, and I guess I have to stick to it. One freezing night around twilight, the house starts to smell like gas, and there’s no hot water and no heat. Uh-oh! I figure the furnace is out, so I call the furnace guy. We long ago cut out the landlord as a middle man in these events, for ease of communication. Furnace guy says the smell of gas means the propane tank is probably empty. Not a furnace problem, and it’s his bowling league night. So, I call the landlord, who fortunately is still at work, and I tell him. We’re both unhappy, because Glack’s Good Oil and Propane (the names were change to protect the not-so-innocent) is supposed to keep the propane tank filled automatically .... supposed to. Landlord calls Glack’s and reports back that he talked to some babe who blithely assured him I

was due for a delivery at the end of the month, and maybe the delivery driver could make it over tomorrow, maybe. According to Landlord, Babe acts as if it’s our fault the tank is empty. Never mind that the temperatures have been subzero, and even though I keep the thermostat set at 70, the furnace is still going to burn a lot of gas keeping the temperature at that level. Now, you would think that Glack’s would factor in the extraordinarily cold weather, wouldn’t you, and factor in how much more propane is being sucked up. But, I guess not. Landlord, who is generally, a soft-spoken, unassuming gentleman, gets a little testy. At this point, I would have been shrieking like the harridan I know I am, so it’s a good thing he didn’t put me on the phone. 9