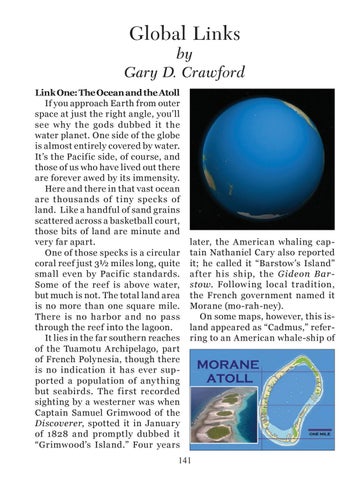 by Gary D. Crawford Link One: The Ocean and the Atoll If you approach Earth from outer space at just the right angle, you’ll see why the gods dubbed it the water planet. One side of the globe is almost entirely covered by water. It’s the Pacific side, of course, and those of us who have lived out there are forever awed by its immensity. Here and there in that vast ocean are thousands of tiny specks of land. Like a handful of sand grains scattered across a basketball court, those bits of land are minute and very far apart. One of those specks is a circular coral reef just 3½ miles long, quite small even by Pacific standards. Some of the reef is above water, but much is not. The total land area is no more than one square mile. There is no harbor and no pass through the reef into the lagoon. It lies in the far southern reaches of the Tuamotu Archipelago, part of French Polynesia, though there is no indication it has ever supported a population of any thing but seabirds. The first recorded sighting by a westerner was when Captain Samuel Grimwood of the Discoverer, spotted it in January of 1828 and promptly dubbed it “Grimwood’s Island.” Four years

later, the American whaling captain Nathaniel Cary also reported it; he called it “Barstow’s Island” af ter his ship, the Gideon Barstow. Follow ing local tradition, the French government named it Morane (mo-rah-ney). On some maps, however, this island appeared as “Cadmus,” referring to an American whale-ship of