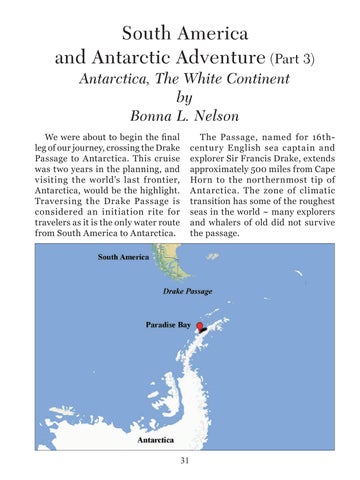 South America and Antarctic Adventure (Part 3) Antarctica, The White Continent by Bonna L. Nelson We were about to begin the final leg of our journey, crossing the Drake Passage to Antarctica. This cruise was two years in the planning, and visiting the worldâ&#x20AC;&#x2122;s last frontier, Antarctica, would be the highlight. Traversing the Drake Passage is considered an initiation rite for travelers as it is the only water route from South America to Antarctica.

The Passage, named for 16thcentury English sea captain and explorer Sir Francis Drake, extends approximately 500 miles from Cape Horn to the northernmost tip of Antarctica. The zone of climatic transition has some of the roughest seas in the world ~ many explorers and whalers of old did not survive the passage.