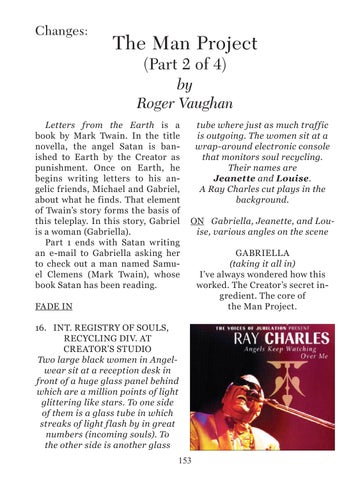 by Roger Vaughan Letters from the Earth is a book by Mark Twain. In the title novella, the angel Satan is banished to Earth by the Creator as punishment. Once on Earth, he begins writing letters to his angelic friends, Michael and Gabriel, about what he finds. That element of Twain’s story forms the basis of this teleplay. In this story, Gabriel is a woman (Gabriella). Part 1 ends with Satan writing an e-mail to Gabriella asking her to check out a man named Samuel Clemens (Mark Twain), whose book Satan has been reading.

tube where just as much traffic is outgoing. The women sit at a wrap-around electronic console that monitors soul recycling. Their names are Jeanette and Louise. A Ray Charles cut plays in the background. ON Gabriella, Jeanette, and Louise, various angles on the scene

FADE IN 16. INT. REGISTRY OF SOULS, RECYCLING DIV. AT CREATOR’S STUDIO Two large black women in Angelwear sit at a reception desk in front of a huge glass panel behind which are a million points of light glittering like stars. To one side of them is a glass tube in which streaks of light flash by in great numbers (incoming souls). To the other side is another glass 153

GABRIELLA (taking it all in) I’ve always wondered how this worked. The Creator’s secret ingredient. The core of the Man Project.