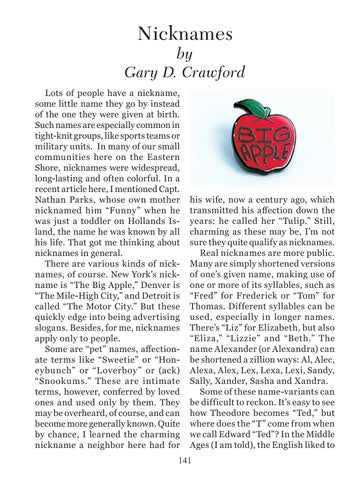 by Gary D. Crawford Lots of people have a nickname, some little name they go by instead of the one they were given at birth. Such names are especially common in tight-knit groups, like sports teams or military units. In many of our small communities here on the Eastern Shore, nicknames were widespread, long-lasting and often colorful. In a recent article here, I mentioned Capt. Nathan Parks, whose own mother nicknamed him “Funny” when he was just a toddler on Hollands Island, the name he was known by all his life. That got me thinking about nicknames in general. There are various kinds of nicknames, of course. New York’s nickname is “The Big Apple,” Denver is “The Mile-High City,” and Detroit is called “The Motor City.” But these quickly edge into being advertising slogans. Besides, for me, nicknames apply only to people. Some are “pet” names, affectionate terms like “Sweetie” or “Honeybunch” or “Loverboy” or (ack) “Snookums.” These are intimate terms, however, conferred by loved ones and used only by them. They may be overheard, of course, and can become more generally known. Quite by chance, I learned the charming nickname a neighbor here had for

his wife, now a century ago, which transmitted his affection down the years: he called her “Tulip.” Still, charming as these may be, I’m not sure they quite qualify as nicknames. Real nicknames are more public. Many are simply shortened versions of one’s given name, making use of one or more of its syllables, such as “Fred” for Frederick or “Tom” for Thomas. Different syllables can be used, especially in longer names. There’s “Liz” for Elizabeth, but also “Eliza,” “Lizzie” and “Beth.” The name Alexander (or Alexandra) can be shortened a zillion ways: Al, Alec, Alexa, Alex, Lex, Lexa, Lexi, Sandy, Sally, Xander, Sasha and Xandra. Some of these name-variants can be difficult to reckon. It’s easy to see how Theodore becomes “Ted,” but where does the “T” come from when we call Edward “Ted”? In the Middle Ages (I am told), the English liked to