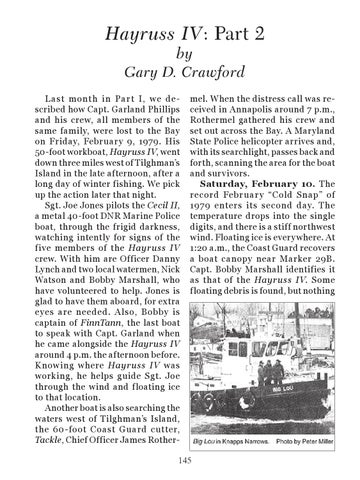 L ast mont h in Par t I, we described how Capt. Garland Phillips and his crew, all members of the same family, were lost to the Bay on Friday, February 9, 1979. His 50-foot workboat, Hayruss IV, went down three miles west of Tilghman’s Island in the late afternoon, after a long day of winter fishing. We pick up the action later that night. Sgt. Joe Jones pilots the Cecil II, a metal 40-foot DNR Marine Police boat, through the frigid darkness, watching intently for signs of the five members of the Hayruss IV crew. With him are Officer Danny Lynch and two local watermen, Nick Watson and Bobby Marshall, who have volunteered to help. Jones is glad to have them aboard, for extra eyes are needed. A lso, Bobby is captain of FinnTann, the last boat to speak with Capt. Garland when he came alongside the Hayruss IV around 4 p.m. the afternoon before. Knowing where Hayruss IV was working, he helps guide Sgt. Joe through the wind and f loating ice to that location. Another boat is also searching the waters west of Tilghman’s Island, the 60-foot Coast Guard cutter, Tackle, Chief Officer James Rother-

mel. When the distress call was received in Annapolis around 7 p.m., Rothermel gathered his crew and set out across the Bay. A Maryland State Police helicopter arrives and, with its searchlight, passes back and forth, scanning the area for the boat and survivors. Saturday, February 10. The record Februar y “Cold Snap” of 1979 enters its second day. The temperature drops into the single digits, and there is a stiff northwest wind. Floating ice is everywhere. At 1:20 a.m., the Coast Guard recovers a boat canopy near Marker 29B. Capt. Bobby Marshall identifies it as that of the Hayruss IV. Some floating debris is found, but nothing