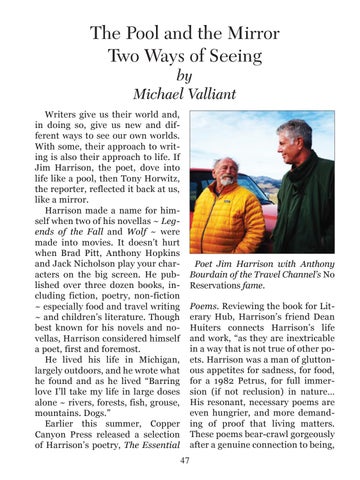 Writers give us their world and, in doing so, give us new and different ways to see our own worlds. With some, their approach to writing is also their approach to life. If Jim Harrison, the poet, dove into life like a pool, then Tony Horwitz, the reporter, reflected it back at us, like a mirror. Harrison made a name for himself when two of his novellas ~ Legends of the Fall and Wolf ~ were made into movies. It doesn’t hurt when Brad Pitt, Anthony Hopkins and Jack Nicholson play your characters on the big screen. He published over three dozen books, including fiction, poetry, non-fiction ~ especially food and travel writing ~ and children’s literature. Though best known for his novels and novellas, Harrison considered himself a poet, first and foremost. He lived his life in Michigan, largely outdoors, and he wrote what he found and as he lived “Barring love I’ll take my life in large doses alone ~ rivers, forests, fish, grouse, mountains. Dogs.” Earlier this summer, Copper Canyon Press released a selection of Harrison’s poetry, The Essential

Poet Jim Harrison with Anthony Bourdain of the Travel Channel’s No Reservations fame. Poems. Reviewing the book for Literary Hub, Harrison’s friend Dean Huiters connects Harrison’s life and work, “as they are inextricable in a way that is not true of other poets. Harrison was a man of gluttonous appetites for sadness, for food, for a 1982 Petrus, for full immersion (if not reclusion) in nature… His resonant, necessary poems are even hungrier, and more demanding of proof that living matters. These poems bear-crawl gorgeously after a genuine connection to being, 47