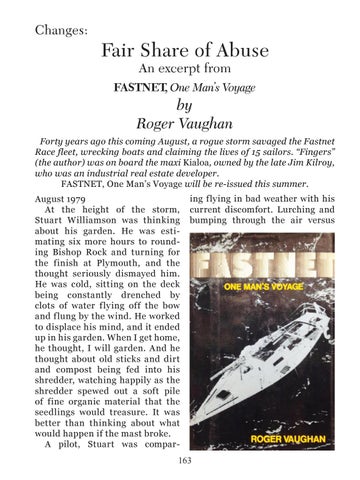 by Roger Vaughan Forty years ago this coming August, a rogue storm savaged the Fastnet Race fleet, wrecking boats and claiming the lives of 15 sailors. “Fingers” (the author) was on board the maxi Kialoa, owned by the late Jim Kilroy, who was an industrial real estate developer. FASTNET, One Man’s Voyage will be re-issued this summer. August 1979 At the height of the storm, Stuart Williamson was thinking about his garden. He was estimating six more hours to rounding Bishop Rock and turning for the finish at Plymouth, and the thought seriously dismayed him. He was cold, sitting on the deck being constantly drenched by clots of water f lying off the bow and f lung by the wind. He worked to displace his mind, and it ended up in his garden. When I get home, he thought, I will garden. And he thought about old sticks and dirt and compost being fed into his shredder, watching happily as the shredder spewed out a soft pile of fine organic material that the seedlings would treasure. It was better than thinking about what would happen if the mast broke. A pilot, Stuart was compar-

ing f lying in bad weather with his current discomfort. Lurching and bumping through the air versus