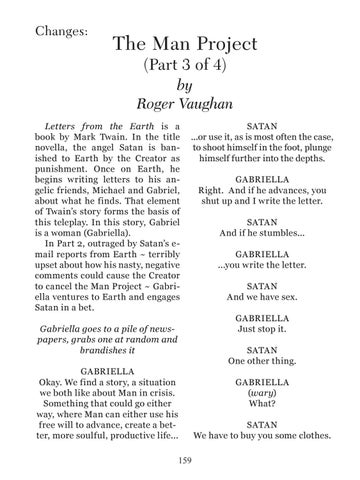 by Roger Vaughan Letters from the Earth is a book by Mark Twain. In the title novella, the angel Satan is banished to Earth by the Creator as punishment. Once on Earth, he begins writing letters to his angelic friends, Michael and Gabriel, about what he finds. That element of Twainâ&amp;#x20AC;&amp;#x2122;s story forms the basis of this teleplay. In this story, Gabriel is a woman (Gabriella). In Part 2, outraged by Satanâ&amp;#x20AC;&amp;#x2122;s email reports from Earth ~ terribly upset about how his nasty, negative comments could cause the Creator to cancel the Man Project ~ Gabriella ventures to Earth and engages Satan in a bet.

SATAN ...or use it, as is most often the case, to shoot himself in the foot, plunge himself further into the depths.

Gabriella goes to a pile of newspapers, grabs one at random and brandishes it GABRIELLA Okay. We find a story, a situation we both like about Man in crisis. Something that could go either way, where Man can either use his free will to advance, create a better, more soulful, productive life... 159