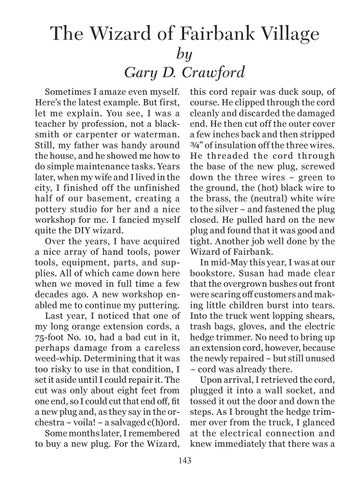 The Wizard of Fairbank Village by Gary D. Crawford

Sometimes I amaze even myself. Here’s the latest example. But first, let me explain. You see, I was a teacher by profession, not a blacksmith or carpenter or waterman. Still, my father was handy around the house, and he showed me how to do simple maintenance tasks. Years later, when my wife and I lived in the city, I finished off the unfinished half of our basement, creating a pottery studio for her and a nice workshop for me. I fancied myself quite the DIY wizard. Over the years, I have acquired a nice array of hand tools, power tools, equipment, parts, and supplies. All of which came down here when we moved in full time a few decades ago. A new workshop enabled me to continue my puttering. Last year, I noticed that one of my long orange extension cords, a 75-foot No. 10, had a bad cut in it, perhaps damage from a careless weed-whip. Determining that it was too risky to use in that condition, I set it aside until I could repair it. The cut was only about eight feet from one end, so I could cut that end off, fit a new plug and, as they say in the orchestra ~ voila! ~ a salvaged c(h)ord. Some months later, I remembered to buy a new plug. For the Wizard,

this cord repair was duck soup, of course. He clipped through the cord cleanly and discarded the damaged end. He then cut off the outer cover a few inches back and then stripped ¾” of insulation off the three wires. He t h r e ade d t he c or d t h r oug h the base of the new plug, screwed down the three wires ~ green to the ground, the (hot) black wire to the brass, the (neutral) white wire to the silver ~ and fastened the plug closed. He pulled hard on the new plug and found that it was good and tight. Another job well done by the Wizard of Fairbank. In mid-May this year, I was at our bookstore. Susan had made clear that the overgrown bushes out front were scaring off customers and making little children burst into tears. Into the truck went lopping shears, trash bags, gloves, and the electric hedge trimmer. No need to bring up an extension cord, however, because the newly repaired ~ but still unused ~ cord was already there. Upon arrival, I retrieved the cord, plugged it into a wall socket, and tossed it out the door and down the steps. As I brought the hedge trimmer over from the truck, I glanced at the electrical connection and knew immediately that there was a