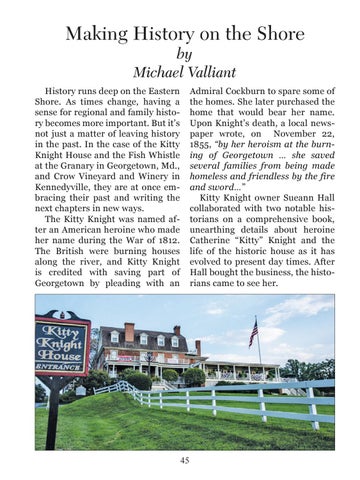 Making History on the Shore by Michael Valliant

Admiral Cockburn to spare some of the homes. She later purchased the home that would bear her name. Upon Knight’s death, a local newspaper wrote, on November 22, 1855, “by her heroism at the burning of Georgetown … she saved several families from being made homeless and friendless by the fire and sword…” Kitty Knight owner Sueann Hall collaborated with two notable historians on a comprehensive book, unearthing details about heroine Catherine “Kitty” Knight and the life of the historic house as it has evolved to present day times. After Hall bought the business, the historians came to see her.

History runs deep on the Eastern Shore. As times change, having a sense for regional and family history becomes more important. But it’s not just a matter of leaving history in the past. In the case of the Kitty Knight House and the Fish Whistle at the Granary in Georgetown, Md., and Crow Vineyard and Winery in Kennedyville, they are at once embracing their past and writing the next chapters in new ways. The Kitty Knight was named after an American heroine who made her name during the War of 1812. The British were burning houses along the river, and Kitty Knight is credited with saving part of Georgetown by pleading with an