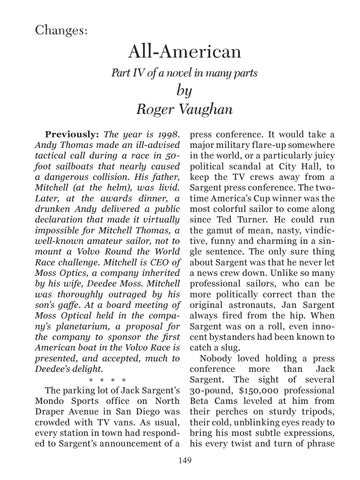 All-American Part IV of a novel in many parts

by Roger Vaughan Previously: The year is 1998. Andy Thomas made an ill-advised tactical call during a race in 50foot sailboats that nearly caused a dangerous collision. His father, Mitchell (at the helm), was livid. Later, at the awards dinner, a drunken Andy delivered a public declaration that made it virtually impossible for Mitchell Thomas, a well-known amateur sailor, not to mount a Volvo Round the World Race challenge. Mitchell is CEO of Moss Optics, a company inherited by his wife, Deedee Moss. Mitchell was thoroughly outraged by his son’s gaffe. At a board meeting of Moss Optical held in the company’s planetarium, a proposal for the company to sponsor the first American boat in the Volvo Race is presented, and accepted, much to Deedee’s delight. * * * * The parking lot of Jack Sargent’s Mondo Sports office on North Draper Avenue in San Diego was crowded with TV vans. As usual, every station in town had responded to Sargent’s announcement of a

press conference. It would take a major military f lare-up somewhere in the world, or a particularly juicy political scandal at City Hall, to keep the TV crews away from a Sargent press conference. The twotime America’s Cup winner was the most colorful sailor to come along since Ted Turner. He could run the gamut of mean, nasty, vindictive, funny and charming in a single sentence. The only sure thing about Sargent was that he never let a news crew down. Unlike so many professional sailors, who can be more politically correct than the original astronauts, Jan Sargent always fired from the hip. When Sargent was on a roll, even innocent bystanders had been known to catch a slug. Nobody loved holding a press conference more than Jack Sargent. The sight of several 30-pound, $150,000 professional Beta Cams leveled at him from their perches on sturdy tripods, their cold, unblinking eyes ready to bring his most subtle expressions, his every twist and turn of phrase