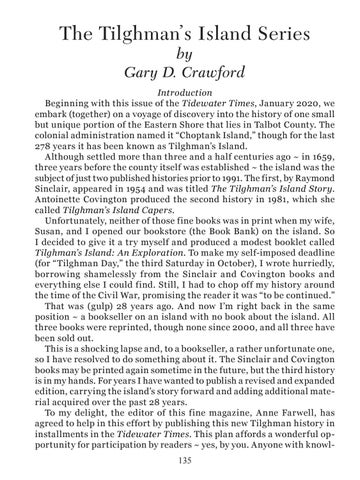 Introduction Beginning with this issue of the Tidewater Times, January 2020, we embark (together) on a voyage of discovery into the history of one small but unique portion of the Eastern Shore that lies in Talbot County. The colonial administration named it “Choptank Island,” though for the last 278 years it has been known as Tilghman’s Island. Although settled more than three and a half centuries ago ~ in 1659, three years before the county itself was established ~ the island was the subject of just two published histories prior to 1991. The first, by Raymond Sinclair, appeared in 1954 and was titled The Tilghman’s Island Story. Antoinette Covington produced the second history in 1981, which she called Tilghman’s Island Capers. Unfortunately, neither of those fine books was in print when my wife, Susan, and I opened our bookstore (the Book Bank) on the island. So I decided to give it a try myself and produced a modest booklet called Tilghman’s Island: An Exploration. To make my self-imposed deadline (for “Tilghman Day,” the third Saturday in October), I wrote hurriedly, borrowing shamelessly from the Sinclair and Covington books and everything else I could find. Still, I had to chop off my history around the time of the Civil War, promising the reader it was “to be continued.” That was (gulp) 28 years ago. And now I’m right back in the same position ~ a bookseller on an island with no book about the island. All three books were reprinted, though none since 2000, and all three have been sold out. This is a shocking lapse and, to a bookseller, a rather unfortunate one, so I have resolved to do something about it. The Sinclair and Covington books may be printed again sometime in the future, but the third history is in my hands. For years I have wanted to publish a revised and expanded edition, carrying the island’s story forward and adding additional material acquired over the past 28 years. To my delight, the editor of this fine magazine, Anne Farwell, has agreed to help in this effort by publishing this new Tilghman history in installments in the Tidewater Times. This plan affords a wonderful opportunity for participation by readers ~ yes, by you. Anyone with knowl135