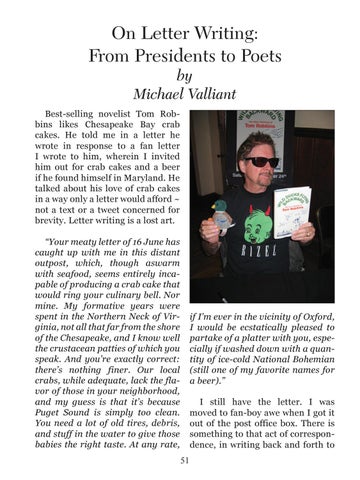 On Letter Writing: From Presidents to Poets by Michael Valliant

Best-selling novelist Tom Robbins likes Chesapeake Bay crab cakes. He told me in a letter he wrote in response to a fan letter I wrote to him, wherein I invited him out for crab cakes and a beer if he found himself in Maryland. He talked about his love of crab cakes in a way only a letter would afford ~ not a text or a tweet concerned for brevity. Letter writing is a lost art. “Your meaty letter of 16 June has caught up with me in this distant outpost, which, though aswarm with seafood, seems entirely incapable of producing a crab cake that would ring your culinary bell. Nor mine. My formative years were spent in the Northern Neck of Virginia, not all that far from the shore of the Chesapeake, and I know well the crustacean patties of which you speak. And you’re exactly correct: there’s nothing finer. Our local crabs, while adequate, lack the flavor of those in your neighborhood, and my guess is that it’s because Puget Sound is simply too clean. You need a lot of old tires, debris, and stuff in the water to give those babies the right taste. At any rate,

if I’m ever in the vicinity of Oxford, I would be ecstatically pleased to partake of a platter with you, especially if washed down with a quantity of ice-cold National Bohemian (still one of my favorite names for a beer).” I still have the letter. I was moved to fan-boy awe when I got it out of the post office box. There is something to that act of correspondence, in writing back and forth to 51