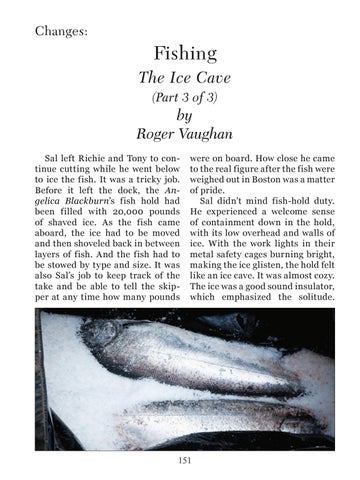 by Roger Vaughan Sal left Richie and Tony to continue cutting while he went below to ice the fish. It was a tricky job. Before it left the dock, the Angelica Blackburn’s fish hold had been filled with 20,000 pounds of shaved ice. As the fish came aboard, the ice had to be moved and then shoveled back in between layers of fish. And the fish had to be stowed by type and size. It was also Sal’s job to keep track of the take and be able to tell the skipper at any time how many pounds

were on board. How close he came to the real figure after the fish were weighed out in Boston was a matter of pride. Sal didn’t mind fish-hold duty. He experienced a welcome sense of containment down in the hold, with its low overhead and walls of ice. With the work lights in their metal safety cages burning bright, making the ice glisten, the hold felt like an ice cave. It was almost cozy. The ice was a good sound insulator, which emphasized the solitude.