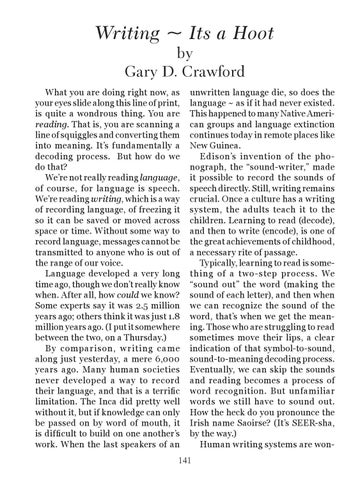 Writing ~ Its a Hoot by Gary D. Crawford

What you are doing right now, as your eyes slide along this line of print, is quite a wondrous thing. You are reading. That is, you are scanning a line of squiggles and converting them into meaning. It’s fundamentally a decoding process. But how do we do that? We’re not really reading language, of course, for language is speech. We’re reading writing, which is a way of recording language, of freezing it so it can be saved or moved across space or time. Without some way to record language, messages cannot be transmitted to anyone who is out of the range of our voice. Language developed a very long time ago, though we don’t really know when. After all, how could we know? Some experts say it was 2.5 million years ago; others think it was just 1.8 million years ago. (I put it somewhere between the two, on a Thursday.) By comparison, w riting came along just yesterday, a mere 6,000 years ago. Many human societies never developed a way to record their language, and that is a terrific limitation. The Inca did pretty well without it, but if knowledge can only be passed on by word of mouth, it is difficult to build on one another’s work. When the last speakers of an

unwritten language die, so does the language ~ as if it had never existed. This happened to many Native American groups and language extinction continues today in remote places like New Guinea. Edison’s invention of the phonograph, the “sound-writer,” made it possible to record the sounds of speech directly. Still, writing remains crucial. Once a culture has a writing system, the adults teach it to the children. Learning to read (decode), and then to write (encode), is one of the great achievements of childhood, a necessary rite of passage. Typically, learning to read is something of a two-step process. We “sound out” the word (making the sound of each letter), and then when we can recognize the sound of the word, that’s when we get the meaning. Those who are struggling to read sometimes move their lips, a clear indication of that symbol-to-sound, sound-to-meaning decoding process. Eventually, we can skip the sounds and reading becomes a process of word recognition. But unfamiliar words we still have to sound out. How the heck do you pronounce the Irish name Saoirse? (It’s SEER-sha, by the way.) Human writing systems are won-