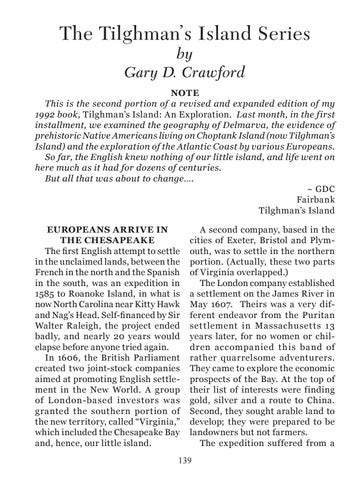 NOTE This is the second portion of a revised and expanded edition of my 1992 book, Tilghman’s Island: An Exploration. Last month, in the first installment, we examined the geography of Delmarva, the evidence of prehistoric Native Americans living on Choptank Island (now Tilghman’s Island) and the exploration of the Atlantic Coast by various Europeans. So far, the English knew nothing of our little island, and life went on here much as it had for dozens of centuries. But all that was about to change…. ~ GDC Fairbank Tilghman’s Island EUROPEANS ARRIVE IN THE CHESAPEAKE The first English attempt to settle in the unclaimed lands, between the French in the north and the Spanish in the south, was an expedition in 1585 to Roanoke Island, in what is now North Carolina near Kitty Hawk and Nag’s Head. Self-financed by Sir Walter Raleigh, the project ended badly, and nearly 20 years would elapse before anyone tried again. In 1606, the British Parliament created two joint-stock companies aimed at promoting English settlement in the New World. A group of L ondon-based investors was granted the southern portion of the new territory, called “Virginia,” which included the Chesapeake Bay and, hence, our little island.

A second company, based in the cities of Exeter, Bristol and Plymouth, was to settle in the northern portion. (Actually, these two parts of Virginia overlapped.) The London company established a settlement on the James River in May 1607. Theirs was a very different endeavor from the Puritan set tlement in Massachuset ts 13 years later, for no women or children accompanied t his band of rather quarrelsome adventurers. They came to explore the economic prospects of the Bay. At the top of their list of interests were finding gold, silver and a route to China. Second, they sought arable land to develop; they were prepared to be landowners but not farmers. The expedition suffered from a