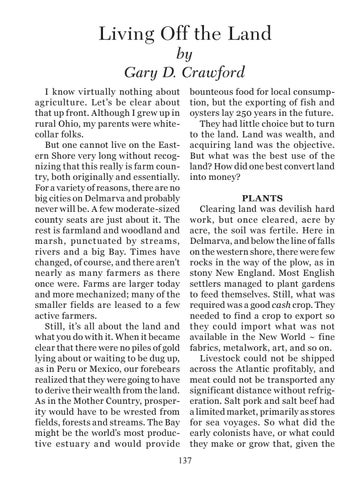 Living Off the Land by Gary D. Crawford

I know virtually nothing about agriculture. Let’s be clear about that up front. Although I grew up in rural Ohio, my parents were whitecollar folks. But one cannot live on the Eastern Shore very long without recognizing that this really is farm country, both originally and essentially. For a variety of reasons, there are no big cities on Delmarva and probably never will be. A few moderate-sized county seats are just about it. The rest is farmland and woodland and marsh, punct uated by streams, rivers and a big Bay. Times have changed, of course, and there aren’t nearly as many farmers as there once were. Farms are larger today and more mechanized; many of the smaller fields are leased to a few active farmers. Still, it’s all about the land and what you do with it. When it became clear that there were no piles of gold lying about or waiting to be dug up, as in Peru or Mexico, our forebears realized that they were going to have to derive their wealth from the land. As in the Mother Country, prosperity would have to be wrested from fields, forests and streams. The Bay might be the world’s most productive estuar y and would prov ide

bounteous food for local consumption, but the exporting of fish and oysters lay 250 years in the future. They had little choice but to turn to the land. Land was wealth, and acquiring land was the objective. But what was the best use of the land? How did one best convert land into money? PLANTS Clearing land was devilish hard work, but once cleared, acre by acre, the soil was fertile. Here in Delmarva, and below the line of falls on the western shore, there were few rocks in the way of the plow, as in stony New England. Most English settlers managed to plant gardens to feed themselves. Still, what was required was a good cash crop. They needed to find a crop to export so they could import what was not available in the New World ~ fine fabrics, metalwork, art, and so on. Livestock could not be shipped across the Atlantic profitably, and meat could not be transported any significant distance without refrigeration. Salt pork and salt beef had a limited market, primarily as stores for sea voyages. So what did the early colonists have, or what could they make or grow that, given the