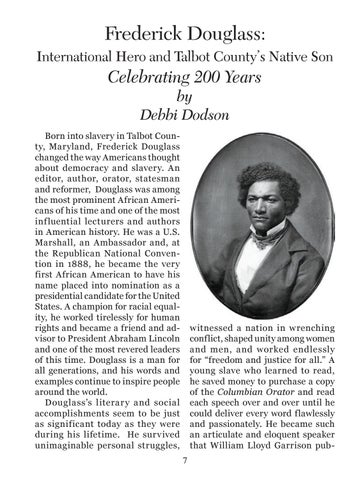 Born into slavery in Talbot County, Maryland, Frederick Douglass changed the way Americans thought about democracy and slavery. An editor, author, orator, statesman and reformer, Douglass was among the most prominent African Americans of his time and one of the most inf luential lecturers and authors in American history. He was a U.S. Marshall, an Ambassador and, at the Republican National Convention in 1888, he became the very first African American to have his name placed into nomination as a presidential candidate for the United States. A champion for racial equality, he worked tirelessly for human rights and became a friend and advisor to President Abraham Lincoln and one of the most revered leaders of this time. Douglass is a man for all generations, and his words and examples continue to inspire people around the world. Douglass’s literar y and social accomplishments seem to be just as significant today as they were during his lifetime. He survived unimaginable personal struggles,

witnessed a nation in wrenching conflict, shaped unity among women and men, and worked endlessly for “freedom and justice for all.” A young slave who learned to read, he saved money to purchase a copy of the Columbian Orator and read each speech over and over until he could deliver every word flawlessly and passionately. He became such an articulate and eloquent speaker that William Lloyd Garrison pub7