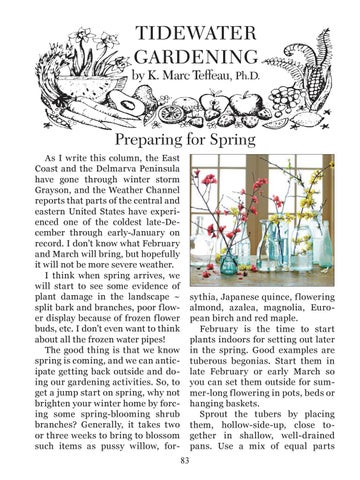 Preparing for Spring As I write this column, the East Coast and the Delmarva Peninsula have gone through winter storm Grayson, and the Weather Channel reports that parts of the central and eastern United States have experienced one of the coldest late-December through early-January on record. I donâ&amp;#x20AC;&amp;#x2122;t know what February and March will bring, but hopefully it will not be more severe weather. I think when spring arrives, we will start to see some evidence of plant damage in the landscape ~ split bark and branches, poor flower display because of frozen flower buds, etc. I donâ&amp;#x20AC;&amp;#x2122;t even want to think about all the frozen water pipes! The good thing is that we know spring is coming, and we can anticipate getting back outside and doing our gardening activities. So, to get a jump start on spring, why not brighten your winter home by forcing some spring-blooming shrub branches? Generally, it takes two or three weeks to bring to blossom such items as pussy willow, for-

sythia, Japanese quince, f lowering almond, azalea, magnolia, European birch and red maple. February is the time to start plants indoors for setting out later in the spring. Good examples are tuberous begonias. Start them in late February or early March so you can set them outside for summer-long f lowering in pots, beds or hanging baskets. Sprout the tubers by placing them, hollow-side-up, close together in shallow, well-drained pans. Use a mix of equal parts 83