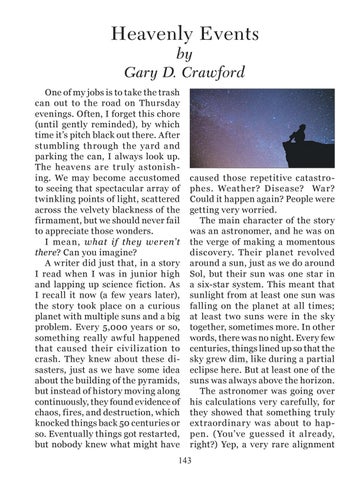 One of my jobs is to take the trash can out to the road on Thursday evenings. Often, I forget this chore (until gently reminded), by which time it’s pitch black out there. After stumbling through the yard and parking the can, I always look up. The heavens are truly astonishing. We may become accustomed to seeing that spectacular array of twinkling points of light, scattered across the velvety blackness of the firmament, but we should never fail to appreciate those wonders. I mean, what if they weren’t there? Can you imagine? A writer did just that, in a story I read when I was in junior high and lapping up science fiction. As I recall it now (a few years later), the story took place on a curious planet with multiple suns and a big problem. Every 5,000 years or so, something really awful happened that caused their civ ilization to crash. They knew about these disasters, just as we have some idea about the building of the pyramids, but instead of history moving along continuously, they found evidence of chaos, fires, and destruction, which knocked things back 50 centuries or so. Eventually things got restarted, but nobody knew what might have

caused those repetitive catastrophes. Weat her? Disease? War? Could it happen again? People were getting very worried. The main character of the story was an astronomer, and he was on the verge of making a momentous discover y. Their planet revolved around a sun, just as we do around Sol, but their sun was one star in a six-star system. This meant that sunlight from at least one sun was falling on the planet at all times; at least two suns were in the sky together, sometimes more. In other words, there was no night. Every few centuries, things lined up so that the sky grew dim, like during a partial eclipse here. But at least one of the suns was always above the horizon. The astronomer was going over his calculations very carefully, for they showed that something truly extraordinary was about to happen. (You’ve guessed it already, right?) Yep, a very rare alignment