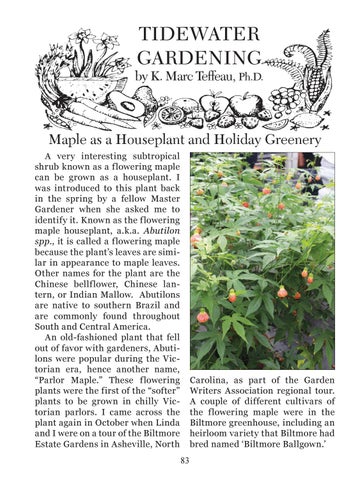 Maple as a Houseplant and Holiday Greenery A very interesting subtropical shrub known as a f lowering maple can be grown as a houseplant. I was introduced to this plant back in the spring by a fellow Master Gardener when she asked me to identify it. Known as the f lowering maple houseplant, a.k.a. Abutilon spp., it is called a f lowering maple because the plant’s leaves are similar in appearance to maple leaves. Other names for the plant are the Chinese bellf lower, Chinese lantern, or Indian Mallow. Abutilons are native to southern Brazil and are commonly found throughout South and Central America. An old-fashioned plant that fell out of favor with gardeners, Abutilons were popular during the Victorian era, hence another name, “Parlor Maple.” These f lowering plants were the first of the “softer” plants to be grown in chilly Victorian parlors. I came across the plant again in October when Linda and I were on a tour of the Biltmore Estate Gardens in Asheville, North

Carolina, as part of the Garden Writers Association regional tour. A couple of different cultivars of the f lowering maple were in the Biltmore greenhouse, including an heirloom variety that Biltmore had bred named ‘Biltmore Ballgown.’ 83