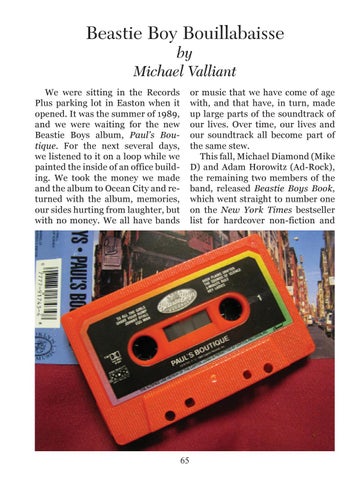 or music that we have come of age with, and that have, in turn, made up large parts of the soundtrack of our lives. Over time, our lives and our soundtrack all become part of the same stew. This fall, Michael Diamond (Mike D) and Adam Horowitz (Ad-Rock), the remaining two members of the band, released Beastie Boys Book, which went straight to number one on the New York Times bestseller list for hardcover non-fiction and

We were sitting in the Records Plus parking lot in Easton when it opened. It was the summer of 1989, and we were waiting for the new Beastie Boys album, Paulâ&amp;#x20AC;&amp;#x2122;s Boutique. For the next several days, we listened to it on a loop while we painted the inside of an office building. We took the money we made and the album to Ocean City and returned with the album, memories, our sides hurting from laughter, but with no money. We all have bands