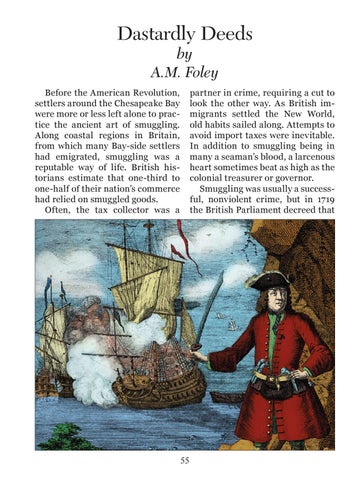 Before the American Revolution, settlers around the Chesapeake Bay were more or less left alone to practice the ancient art of smuggling. Along coastal regions in Britain, from which many Bay-side settlers had emigrated, smuggling was a reputable way of life. British historians estimate that one-third to one-half of their nationâ&amp;#x20AC;&amp;#x2122;s commerce had relied on smuggled goods. Often, the tax collector was a

partner in crime, requiring a cut to look the other way. As British immigrants settled the New World, old habits sailed along. Attempts to avoid import taxes were inevitable. In addition to smuggling being in many a seamanâ&amp;#x20AC;&amp;#x2122;s blood, a larcenous heart sometimes beat as high as the colonial treasurer or governor. Smuggling was usually a successful, nonviolent crime, but in 1719 the British Parliament decreed that