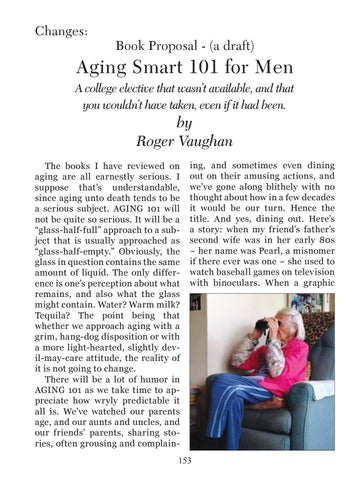 Aging Smart 101 for Men A college elective that wasn’t available, and that you wouldn’t have taken, even if it had been.

by Roger Vaughan The books I have reviewed on aging are all earnestly serious. I suppose that’s understandable, since aging unto death tends to be a serious subject. AGING 101 will not be quite so serious. It will be a “glass-half-full” approach to a subject that is usually approached as “glass-half-empty.” Obviously, the glass in question contains the same amount of liquid. The only difference is one’s perception about what remains, and also what the glass might contain. Water? Warm milk? Tequila? The point being that whether we approach aging with a grim, hang-dog disposition or with a more light-hearted, slightly devil-may-care attitude, the reality of it is not going to change. There will be a lot of humor in AGING 101 as we take time to appreciate how wryly predictable it all is. We’ve watched our parents age, and our aunts and uncles, and our friends’ parents, sharing stories, often grousing and complain-

ing, and sometimes even dining out on their amusing actions, and we’ve gone along blithely with no thought about how in a few decades it would be our turn. Hence the title. And yes, dining out. Here’s a story: when my friend’s father’s second wife was in her early 80s ~ her name was Pearl, a misnomer if there ever was one ~ she used to watch baseball games on television with binoculars. When a graphic